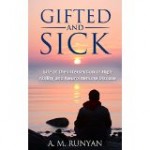 Amanda Runyan, who was an author before she became ill, wrote this book based on her own experiences and the experiences she got from 20 interviews with people who also suffer from a neuro-immune disease. In her opinion these are diseases that create energy problems for people, based on a dysfunction on a cellular level. Examples she gives are: chronic fatigue syndrome, ME, Lyme disease, systemic fungal diseases, multiple chemical sensitivity as well as autism spectrum disorders. She found the gifted people she interviewed for her book on internet forums for people with a neuro-immune disease where she saw that some people indicated that they are gifted. Through the interviews (which she mostly did by e-mail or phone because of her own lack of energy) she traced the patterns she found.
She wrote the book to answer the many questions she had and to help others in similar circumstances.

Summary
An important issue the author experienced was that she had the idea that the disease was responsible for lowering her IQ, while still considering herself gifted. That experience was supported by others and she feels this can be applied in a broader sense. When you are gifted, you can have problems in one area of the brain, but another part of the brain can still function on a very high level. While sick she struggled to perform very simple tasks.
She feels that gifted people with this kind of disease have ‘special needs’. These diseases are an extra challenge to your identity, there is a risk of losing your job, etc.. It often happens that the gifted don’t understand their illness any more than the people around them. And their limitations aren’t noticed. On many tests they will score average or above average, but this indicates an unseen decline, because the starting level was never known. A good comparison can be made with a professional athlete. When an athlete is injured, they are still a high performing athlete and not an average amateur. The same comparison can be made for the brains of gifted people with a neuro-immune disease. They also can’t be compared to people of average IQ.
Besides experiences with the disease and functioning in daily life, the book also presents many practical tips from the author and the interviewees.

Reviewer’s opinion
I find the book very interesting and a good read. To my knowledge, it is the first time that anyone has written about the experiences of gifted people with this kind of condition. There is a wealth of experiences, which are extremely important to share with gifted people, but also with physicians and other caregivers. The experiences related to treatment by physicians largely overlap my own experiences and research into experiences of gifted people with their doctors. (I gave some presentations on the subject, see the website of the IHBV, an article about this subject will be written in the future.)
Also striking is the observation of Runyan, that I share based on my research, that to outsiders gifted people often seem less ill than they actually are. They often try to continue doing as much as possible. Often they (and their close friends and relatives) are the only ones who see that something is not right, but to a doctor it may seem not that bad. Does that have anything to do with the basic energy level or drive that is higher for most gifted people to start with? They have often found various ways of coping with their disease and its limitations and continue to do as much as they can. They know that it’s much less than before, but doctors can’t see the seriousness of the situation.
This book is about people who have problems with their energy level. As a physician I know from personal experience that these patients are quite a challenge. There are rarely objective clues and the story of the patient is the only information you get. Most gifted people will be one step ahead of their doctor already because they will have studied their disease extensively by themselves. That is challenging to the doctor-patient relationship. It is tempting to think that only gifted doctors would be able to help these people, because in many ways these are very complex cases.
Runyan’s experiences are very useful to explain what happens to gifted people with dementia or brain trauma. The principle of “You score average on tests, so there’s nothing wrong” can be applied here as well. In this way dementia and other issues with someone’s brain can often be hidden in this group and recognised very late.
Therefore I’m extremely happy that this book now exists. If there was any point of criticism to make, it would be that it’s quite comprehensive and that, as a reader, I sometimes need a summary. For example, chapter 8 has 65 points, where Runyan shows the advantages (‘privileges’) of having an official diagnosis. I would have liked to see some main categories and examples of those.
In some places I see the results of the research mixed with practical recommendations. I would prefer to keep those separated to create more of an overview. For example, chapter 12 has a list of recommendations, which is quite clear.
Runyan surprised me by including Autistic Spectrum disorders among the neuro-immune illnesses. She explains this in chapter 9, referring research that shows that in neuro-immune diseases (ME and chronic fatigue syndrome) the glutamate metabolism is disrupted, which has also been shown for autistic behavior. Maybe the highly intelligent brain has an extra sensitivity to neuro-immune diseases or there is a connection between neuro-immune diseases and intelligence, she asks herself. I find this a bit too much of a sidestep, that is not necessary for the information in the story in my opinion. But it could also be an insight that shows that Runyan is ahead of her time and she will be proved right in a number of years. In any case, she has done a lot of research besides the interviews and I find that very positive.
I highly recommend her book to gifted people with neuro-immune diseases and to medical doctors and other caregivers.
The book makes me want to continue with our own research into gifted people who are ill and to publicize our findings.